When you’ve done conventions for as long as I have, they become a part of your identity. The excitement and inspiration for new costumes, the meet-ups with friends we haven’t seen in months or years, Artist Alley filled with incredibly brilliant pieces, the occasion of bumping into a celebrity, and the bustle of the convention floor become engrained into your very soul. Sure, I complain about how crowded certain conventions have become *coughSDCCcough*, but despite my annoyances, I inevitably end up joyously anticipating the next one I can attend. When I became a military spouse and then a mom, I began to fear that cherished piece of my identity would certainly become a distant memory. With the constant moving to new locations every few years, how could I develop a community similar to what I was already familiar with in California? When a friend came to visit me in Texas during PAX South, I decided to do that craziest thing I imagined: attend a convention I’ve never been to before with a toddler all on my own.

I had already begun to feel isolated from my close friends and geek community when my husband and I ended up in Texas on our last PCS. I knew not a single soul and I had a lot of negative biases for our location. When he deployed overseas, that feeling of FOMO and isolation became crushingly noticeable. I was all on my own learning how to raise a toddler under that age of 2 years old, I had gained a lot of weight and became so out of shape a simple walk would wind me, and my small support group of other military spouses was all also struggling with their hectic lives absent of their respective partners. Scrolling and swiping by all my friends’ social media posts made me simultaneously happy for them and mourning my inability to share in these experiences as I once had; the lack of invites to events I once was overloaded with made me believe I had been forgotten about. I began mourning my old life in earnest as if I’d never see it again. It was easy to begin believing my existence was only wrapped up in being a mother and partner instead of that new aspect of myself being a beautiful extension. I began to think maybe “growing-up” meant leaving behind all of that. I was so very wrong.

When my good friend Jay asked me if I wanted to attend PAX South with her, my initial response was to use Hazel as an excuse. “Well, it’s just me by myself with her. I don’t know how well it would go. She might keep us up at night and there are a lot more things to drag along with a toddler.” After Jay’s reassurance that it would be okay because we would be super close to the convention, only 2.5 hours from my house, and that Jay can sleep through a hotel fire (true story), I committed to going. After all, what is parenting without challenges and adventures, right? I’m not going to lie, I contemplated canceling several times as my anxiety ramped up and had me constantly overthinking. To distract myself from the barrage of negative thoughts, I decided to plan our costumes. I already had a Cid Highwind from Final Fantasy VII costume, and I’ve always wanted to dress a baby in a Moogle costume. I commissioned a friend to make Hazel a Moogle and dusted off my character’s spear and goggles. 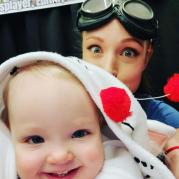 Cid Highwind and a Moogle

When Jay arrived a few days before the con, I leaned into the thought of costuming with Hazel as the bright spot and chose to focus on that rather than the bajillion “what ifs.” Hazel absolutely lights up when she’s around other people. I convinced myself it would be healthy for both her and me to experience this together and that no matter what happened, we could handle it. I did not want my anxiety and irrational fears to dictate what we do and where we go. What kind of sheltered life would that be for her? When we arrived at the convention on Friday, we got settled into our hotel and immediately put on our Jedi costumes. “Ooooo, jacket,” Hazel proclaimed, gleeful about her robe. Carrying her in my arms the few blocks to the convention had me beginning to feel a little shy; people were starring. Then I realized that they were, in fact, starring, but they were also smiling and waving to Hazel, cooing about how cute she was in her matching costume. Hazel enthusiastically waved to her adoring fans which contagiously spread joy to everyone around us. Hazel’s joyous vigor set the tone for the entire weekend.

My initial hesitance in attending a convention where I knew only one person attending and had never been to before began to fade quickly once we arrived. Everywhere we walked, tired faces brightened when they saw Hazel. Her exuberance is infectious to even the most exhausted, grumpy con-goer. When people realized she wearing a costume, it was immediate infatuation and a barrage of coos and photo requests, which of course Hazel ate up every ounce of. She danced to music playing loudly from the stages, flirted with booth attendants, and said, “Hi!” to anyone who would make eye contact. Seeing my child’s delight in experiencing something that I’ve always loved doing brought me immeasurable happiness. I know someday she may not want to costume with me anymore and choose her own individual hobby which brings her happiness, but I will absolutely adore and soak up every moment I can in sharing my beloved hobby with her. She is growing up faster than lightspeed; every single memory is a precious one.

In all her innocent wonder, she reminded me that it’s okay to be unapologetically yourself and to have experiences that are uniquely yours. Growing up doesn’t mean leaving hobbies and creature comforts behind to become some sort of martyr, and it doesn’t mean conforming to what society perceives as normal or mature. In fact, I’d argue that forgetting your true self and fighting against it is the antithesis of maturity and wisdom. When we rally against our spirit, we perish a little bit each time. That may sound pedantic, but we have such fleeting time to live our best lives, so we should always remember to find it where we can.

What worked well for us: