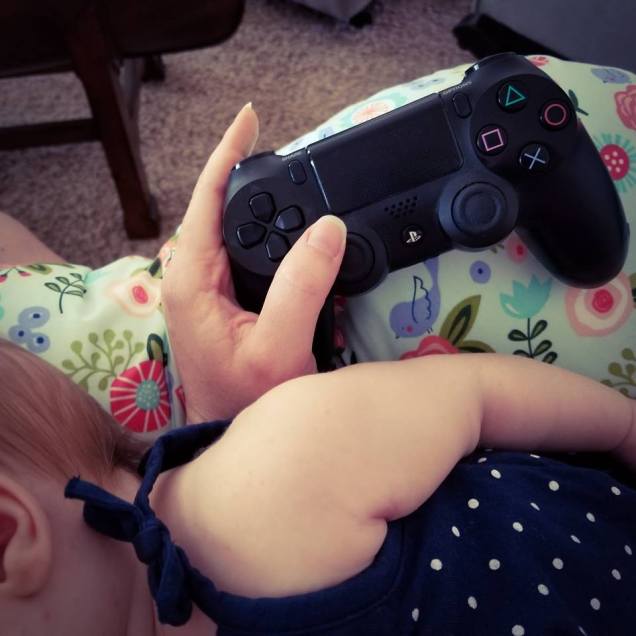 About two months before Hazel was born, I went ham on video games because I knew after she was born, there would be precious little time for anything that didn’t involve taking care of her. Don’t get me wrong, I normally log away arguably too many hours immersed in whatever my favorite game happens to be at the time, but this gave me an excuse to really overdo it. Picture this: a 185 pound, 9 months pregnant woman bouncing around on a fitness ball screaming obscenities that would make George Carlin blush. My husband was seriously concerned that Hazel’s first word might be less than socially acceptable. Then she was born and nothing else mattered in the world except keeping her alive and healing my body and mind. Slowly but surely the days started to get easier as naps started regulating, breastfeeding became second nature, and multitasking was starting to make a comeback. The natural progression for me was to attempt an online match or two with friends while the baby was preoccupied with a boob sandwich. It was an absolute success which not only made me feel normal again, but also made me realize it was possible to still fulfill “me time” as a new mom.

In those first few months, doing anything at all for myself beyond brushing my teeth and showering felt like a monumental challenge, so the mere thought of my past hobbies and forms of entertainment felt like a distant memory and something I’d likely never be able to do again. Once Hazel turned 4 months old, she started developing a relatively reliable routine and I learned to reintroduce small things for myself back into my life. I learned to get some tiny bits of gaming in by playing Animal Crossing Pocket Camp or Fallout Shelter on my phone while Hazel sleepily nursed away. Then one afternoon, my group of online friends all hopped on at the same time and figured since her nursing sessions took about 20 minutes or more, I could squeeze one match or two of The Last of Us multiplayer with them. Much to my surprise, it worked! I positioned her in my arms and used my Boppy for extra support. There was something badass feeling about clearing headshots with an amazing k/d ratio while nurturing my baby at the same time. Most importantly, I got to squeeze in something that was a fun way for me to recharge and I got to be social with my friends. For the first time in months, I felt a semblance of myself reemerging.

Fast forward to today: Hazel is now approaching 17 months and we’ve got a groove going. I know, I know; that likely won’t last very long as life with a baby changes daily, but I’ll take whatever I can get wherever I can get it. Officially a toddler now, she has a pretty solid schedule of waking up around 9:00 a.m., diaper change, nursing, breakfast, playtime, book reading, nurse, nap, lunch, playtime, snack, sometimes nurse, playtime, dinner, bath, and bedtime by 9:00 p.m. I know, she sounds more like a hobbit child rather than a human one with all the eating and sleeping, to which I am always jealous of. With all her activity and food prep, I rarely have much time to do much of anything for myself unless she’s asleep. Naptime consists of working out and trying to catch up on chores. Once she’s up from her nap, it’s nonstop until bedtime. As soon as I close her bedroom door, I feel a wave of relief: I’m now free to catch up on a show or, more often than not, hop online with my friends and play far too many matches than I should until my eyes barely stay open. I may not be able to run raids in WoW or Destiny anymore, but I can definitely manage some quality gaming time here and there. If anything, it makes me appreciate my free time better than I had previously as a childfree individual.

So what’s the takeaway? I suppose I ramble candidly to show you that just because you’re a parent now doesn’t mean that you have to say goodbye to everything that you once identified with and you have to abandon all sense of individuality. It might take time, patience, and acceptance within yourself to realize this – I know it did for me without feeling weird guilt when I would do any activity that didn’t involve being a wife or mother. It’s so incredibly important that we are true to ourselves, which is different for each of us. We may forever be changed as parents and life will never, ever be the same, but we don’t have to let everything about our unique individuality fade away. What does that teach our children if we do? What happens to our own self worth? Will our relationships outside of our family suffer? Does that pave an unfulfilled life with echoes of resentment? We spend so much time preaching to children the importance of individuality and the things they are passionate about. I think it’s time we take our own advice and lead by example.