I used to roll my eyes and guffaw at the very idea of making my own baby food. I knew friends who did it for their little ones, saw books and gadgets for the homemade stuff in their baby registries, and plenty of mom blogs proclaiming the benefits of doing it yourself. It always seemed like a Martha Stewartesque waste of precious energy and time when the jarred stuff existed and was readily available on supermarket shelves. When Hazel started longingly gazing at food and smacking her lips hungrily, my perspective shifted a bit. So did the overwhelming sense of, “I can’t bullocks this up; if I do, she’ll forever be screwed up.”

Spoilers: she won’t be, and it’s okay to mess up a bit – pretty much the definition of parenting, in a nutshell.

If you’re a mom like me, you’ve probably scoured the internet and books for literally anything and everything regarding Baby’s growth and development. I know I obsessed to an unhealthy degree about Hazel’s weight when her 3-month check-up showed her weight was in a less than desirable percentile despite her being in fantastic health and mental development and greedily nursing every 2 hours. I had to remind myself that she’s a breastfed baby and by this age, they tend to not be as hefty in weight compared to their formula-fed counterparts, but I found myself believing I was a terrible mother or was somehow failing my baby. One doctor suggested introducing rice cereal to help chunk her up and provide some extra iron, but it went against my instincts. I wasn’t against baby cereals in general, but they are basically nutritional sawdust on their own.

I started researching like mad, asking questions and second opinions and, most importantly, learned to allow my instincts to guide me and to trust them. Feeding her any solids at such an early age made me feel uncomfortable, and she didn’t appear to have any interest yet. My instincts were validated throughout my research and so I learned to trust them. After all, who knows my baby better than me?

I began by sitting her up in her high chair while I prepared dinner in the evening so she could watch what I was doing and experience the smells and sounds of the kitchen. I know that might seem silly, but she seemed to love it. I’d explain to her everything I was doing, even though she couldn’t quite understand me. I started handing her little wooden bowls and spoons to play with while we ate and would keep her at the table with us while we ate dinner. She started mimicking the motions of putting the spoon to her mouth and would move her mouth like she was chewing. Every once in a while, I’d offer her a tiny fingertip full of avocado, banana, or pear to see if she’d taste it. Most of the time, she’d turn her head away or push it out with her tongue. She wasn’t ready yet, and that was okay.

On the morning she turned 5 months old, while I was munching on a slice of pear, she smacked her lips and leaned forward towards it. I let her mouth it for a bit and she loved it. Since she was able to sit up on her own, grasp things firmly in her hands, and lost her tongue-thrust reflex (which pushes the food out of her mouth), I decided the adventure of solid food should begin. Each day, we tried a fingertip full of something new that was mushy and easily palatable to a tiny toothless mouth: avocado, banana, sweet potato, oatmeal, etc. Nothing too sweet or too strong in flavor. Slowly but surely, she started taking a little more than mere tastes and upgraded to spoonfuls at a time. I started to puree single fruits and veggies for her and feeding her little bits after nursing sessions. Then I started mixing purees to change up the pace and keep things interesting; after all, I don’t like eating the same thing every single day, so why would she? Who knew the combinations of broccoli and pear or black beans, apple, and brown rice would taste so delicious? I certainly never would have. My goal was to not only offer a varied and balanced diet, but also hopefully prevent the pickiness that seems so prevalent in babies and toddlers. While at this age, she still received the majority of nutrients from my breast milk, but it made sense for me to introduce a wide variety for when she no longer depended on my body for nutrition. She quickly became an eager and willing eater, and I was becoming a mom motivated to eat healthier because little eyes were watching and learning. Which also meant I needed to feed her things that I didn’t like and making sure I didn’t make disgusted faces when trying a bite myself or watching her eat it. My husband absolutely despises avocado, but would dice her up pieces and act like it was the most gourmet thing he’d ever seen and say, “Mmmmmmmmmm!”

Hazel thrilled about her carrot mash. 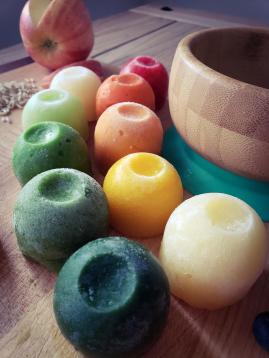 I often made purees in big batches and froze them for easy access. I used any leftover in smoothies or soups.

By the time Hazel turned 7 months old, she was devouring anything and everything my husband and I were eating. I kept a small Ninja blender around and pulsed the chunkier foods smoother so it was easier to chew with her lack of molars. No more “baby food,” she ate table food with the big people! Sometimes I would add a little rice cereal or chia seeds to something to thicken it up and add texture, or yogurt to cool something down if it was too spicy. It was interesting seeing the reactions of friends and family to her indiscriminate eating. I felt a little ping of mom pride – I felt like I had done something right. I also realized that I was extremely fortunate she didn’t appear to have any allergies and still wanted to nurse regularly. In all the guilt and doubt I felt constantly (such is mom life), it felt like a monumental victory.

Today, Hazel is 16 months old! HURRAY! We are still nursing, but have cut down to only two to three times a day: first thing in the morning and right before her nap. Occasionally she’ll ask for “mi-mi” when she’s teething or wants comforting; I don’t offer anymore, but don’t deny her as long as she asks. She eats like a sumo wrestler preparing for a match most days and willingly eats anything that’s placed in front of her. She even ate half of her smash cake on her first birthday, which is more than I can eat!

One of the best things to come from following my instincts and Hazel’s cues in eating solid foods is my lifestyle shift. With little eyes watching how I prepare and eat food, I became pretty conscientious of my choices. I take smaller bites and chew a little slower now. I put smaller portions on my plate or in my bowl. If I am not willing to allow her to try it or have her own portion, I probably shouldn’t be eating it, either. That doesn’t mean I don’t eat ice cream or cake anymore (hello, have you seen my baking section of this blog?), or that I’m going to cancel my subscription to my monthly Japanese snack box; Mama needs her treats! It just means I want to lead by example as best I can. This journey in motherhood is making me a better person in many unexpected ways and I’m looking forward to the rest of this imperfect, beautiful adventure. 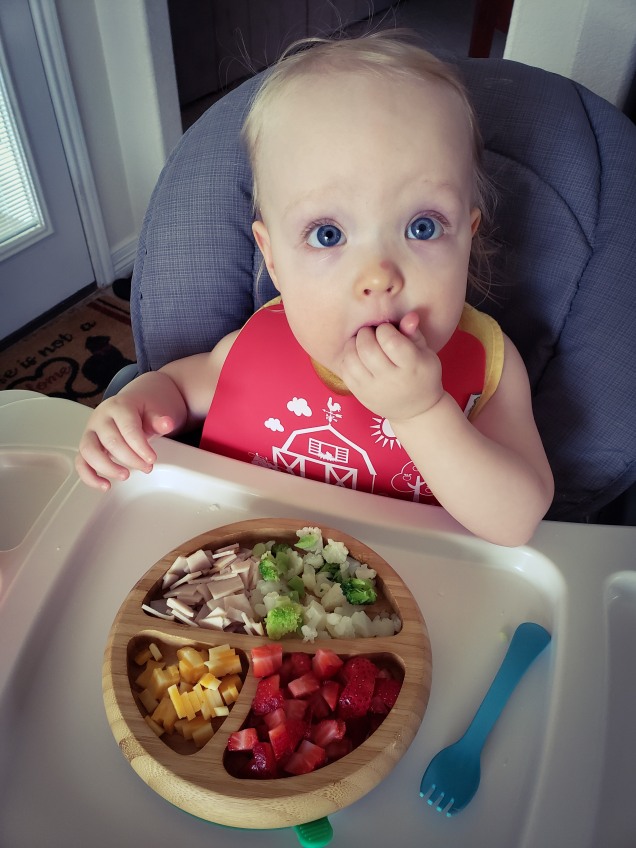 What worked well for us: